You shouldn't miss these 5 books on Gandhi

We bring you 5 children's books on Gandhi that we have read and loved. This is a curated list and it has the best books you will find on the Father of our Nation. Be sure to check out our Gandhi bundle! 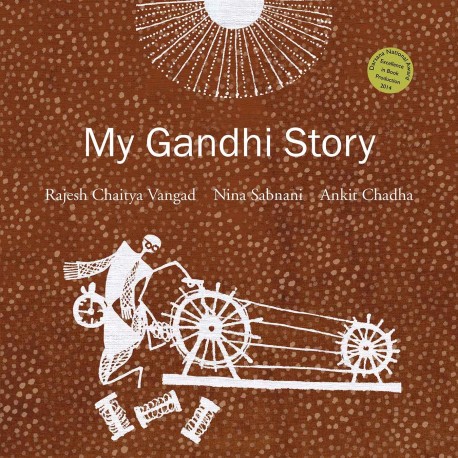 My daughter's first experience of Gandhi was this one! The book was in our first Gandhi-themed Toka Box back in 2016!

The book traces Gandhi's life from childhood to India's Independence in simple, lucid language accompanied by stunning Warli Art Illustrations. When we got to the part in the book about the idea of non-cooperation, she was stunned! It is one of her favorite books still and holds pride of place in her bookshelf!

Since then every year we restock a renewed edition of this unique box! We think your child will love this one.

2.  The Story of Dandi March by Sandhya Rao 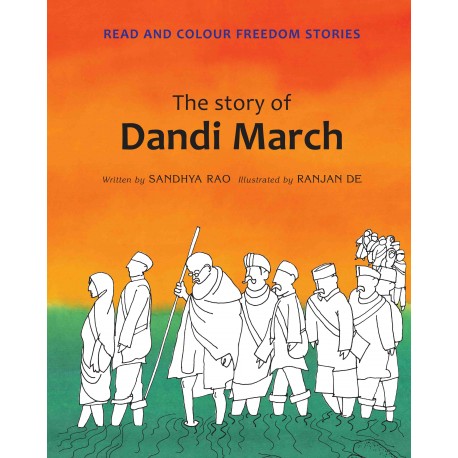 A battle over salt? Yes, fought the Gandhi way! What guns and soldiers could not do, he did simply, quietly and non-violently, just by picking up a lump of salt. Follow Gandhiji’s famous march to Dandi to see the brilliant strategy that made the British give in and the world take notice.

BUY BOTH MY GANDHI STORY AND THE STORY OF DANDI MARCH AS A GANDHI ACTIVITY BOX! 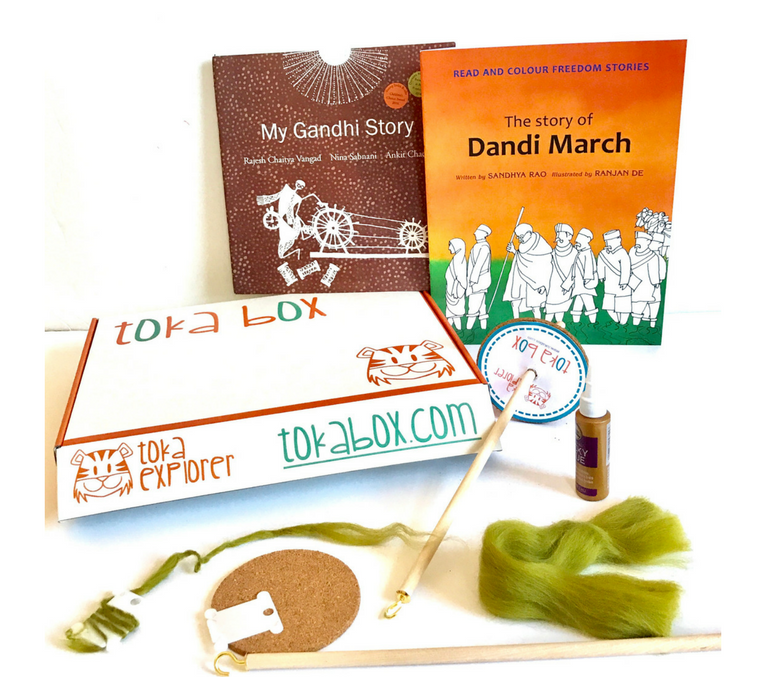 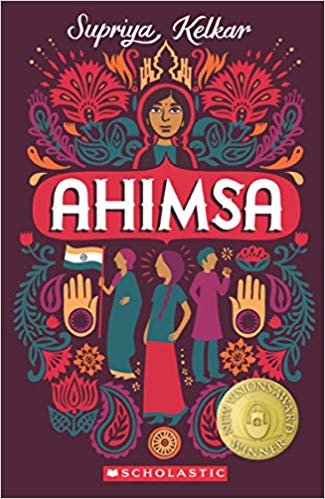 This was our Chapter Book Pick for August 2020! Set in 1942 in the fictitious town of Navrangpur, Ahimsa is a brilliant novel that tells the story of a 10-year-old girl and her role in the Indian Independence movement.  Ahimsa is the most riveting, powerful book we have ever read this year. It works beautifully both as a young adult novel and a historical novel. It gives us such a wonderful peek into the lives and personal conflicts of people who lived during 1942 in India and who were part of India's historic freedom movement.

Set in 1942, Ahimsa is about Anjali, a ten-year-old girl whose mother works for a British officer. Anjali's mother quits her job and joins the freedom movement. Anjali is nonplussed by her mother's choice and she cannot understand why they would have to give up their beautiful clothes and only wear khadi. Anjali and her family are brahmins and hence on top of the caste system. Anjali's parents decide that everyone should be equal and they start challenging the status quo -- they empty the waste from their own toilets, work with the Dalits in their neighborhood how to read and write, and are constantly assessing their beliefs and strategies when it comes to their role in the freedom movement.

4. Being Gandhi by Paro Anand 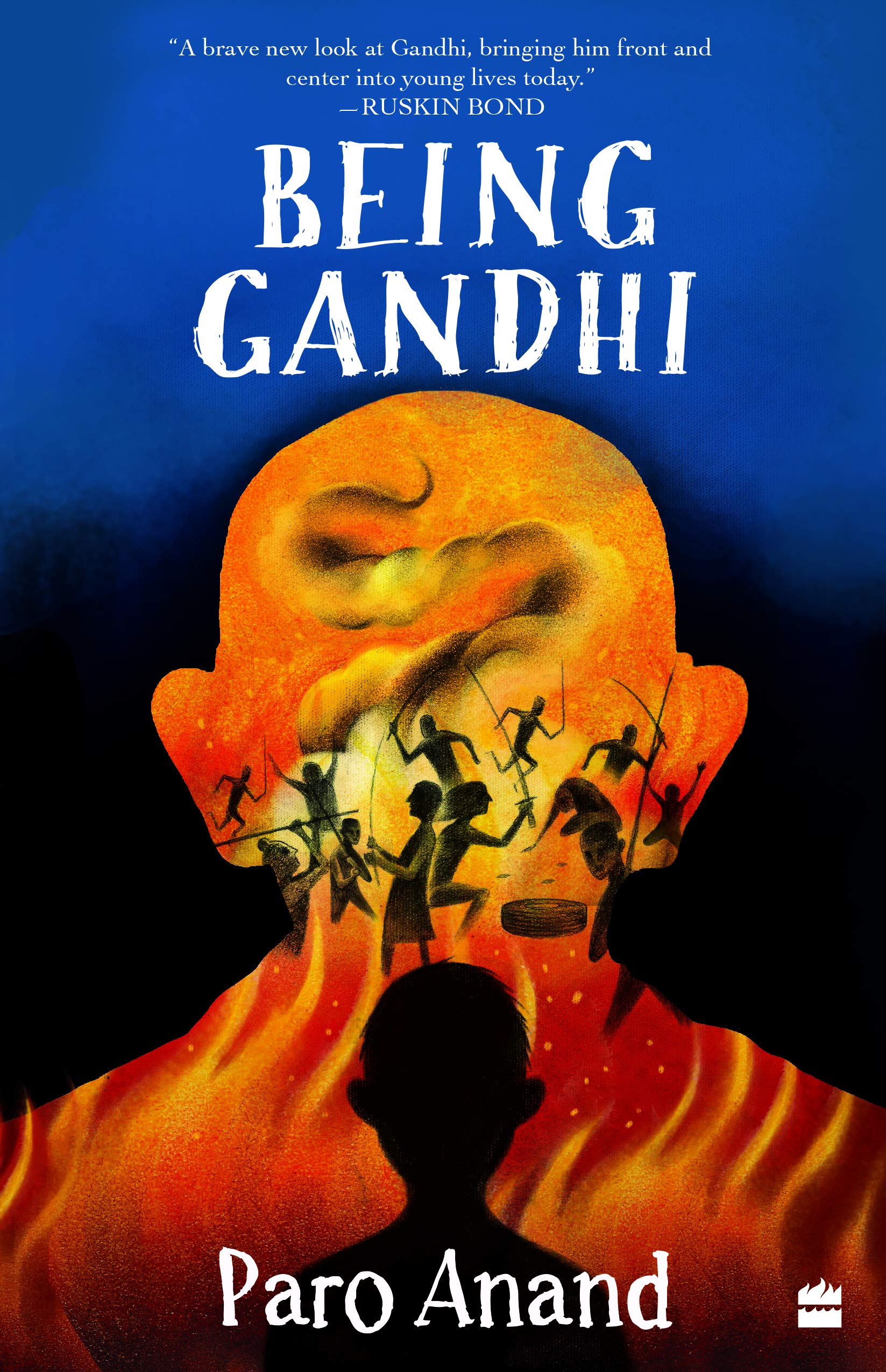 This book created quite a buzz at the Neev Literature Festival held in September 2019 in Bangalore, and rightly so. Paro Anand gives us a brilliant, witty and compelling narrative about a teenage boy named Chandrashekhar who ruefully looks forward to another Gandhi project that he has to do in school when October 2nd is around the corner. However, the anti-Sikh riots break out and Chandrashekhar is shaken to his very core in the aftermath of Indira Gandhi's assassination. He is forced to reexamine his disinterest and to act upon Gandhiji's principles and strategies. When he puts them to use, he discovers something remarkable about them and about himself. The book paints an honest picture of the aftermath of the anti-Sikh riots in 1984. What we love about this book is that it is so well-written that you are engrossed from start to finish. Paro Anand nails the inner monologue of a nonchalant and subsequently shocked teen with so much veracity and conviction. The book segues from disinterest to fear and ultimately, a sense of understanding. We also love the examination of Gandhi's ideas in the context of today's world. We urge adolescents and teens to check it out!

We are thrilled about the rich YA market in India and we look forward to more books like Being Gandhi, books that encourage young people to look at problems and situations with a problem-solving mindset, much like Chandrashekar did in the book. 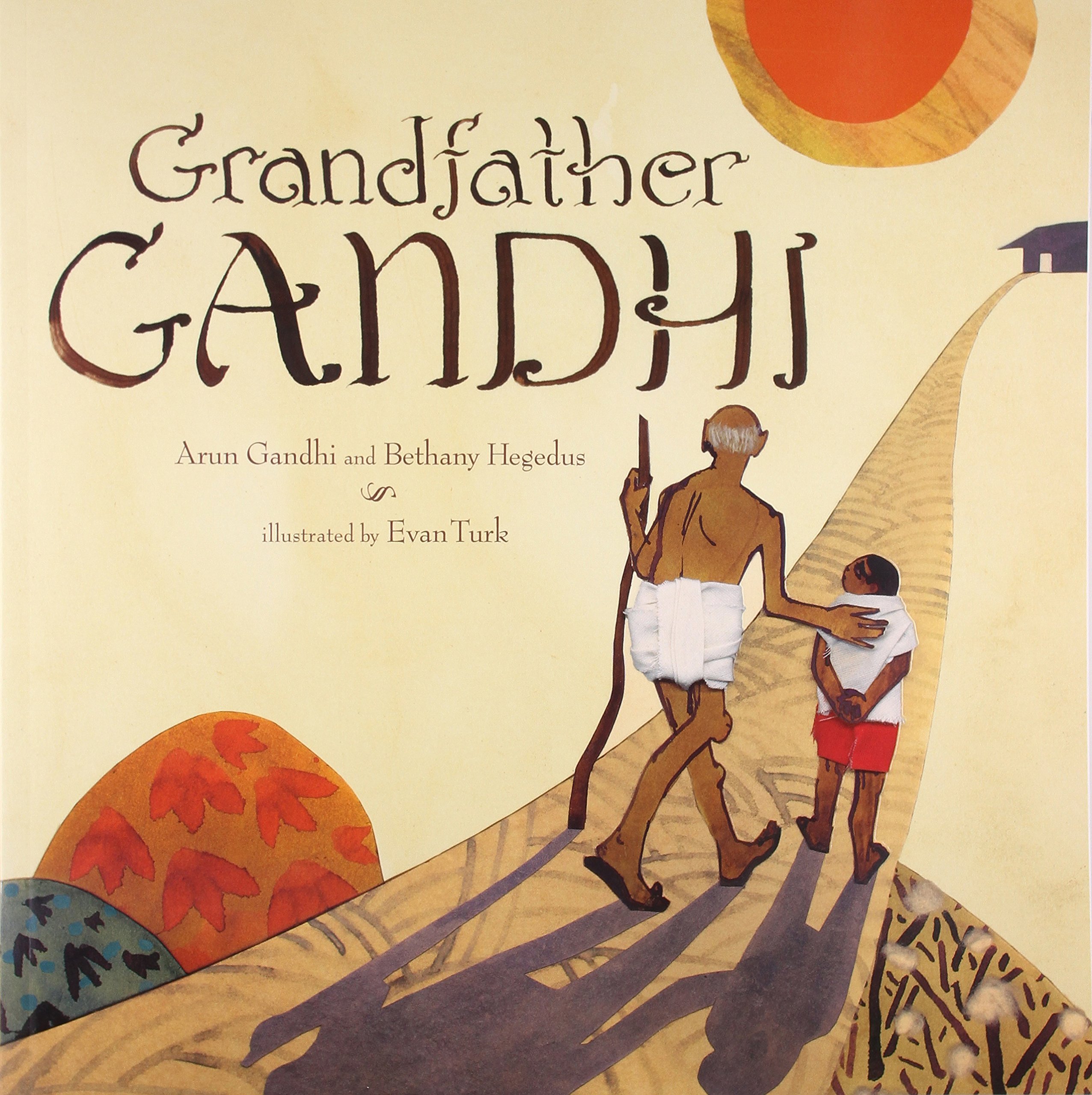 How could he a Gandhi be so easy to anger? One thick, hot day, Arun Gandhi travels with his family to Grandfather Gandhi's village. Silence fills the air-but peace feels far away for young Arun. When an older boy pushes him on the soccer field, his anger fills him in a way that surely a true Gandhi could never imagine. Can Arun ever live up to the Mahatma? Will he ever make his grandfather proud? In this remarkable personal story, Arun Gandhi, with Bethany Hegedus, weaves a stunning portrait of the extraordinary man who taught him to live his life as light. Evan Turk brings the text to breathtaking life with his unique 3-dimensional collage paintings. 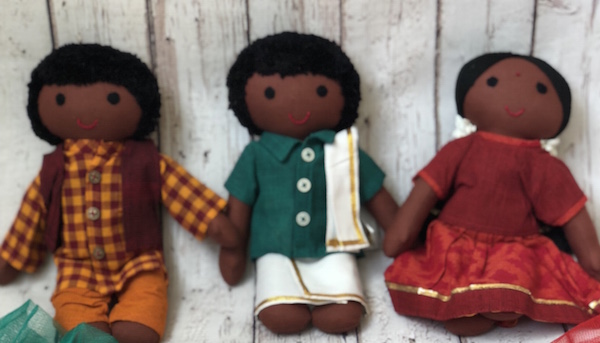 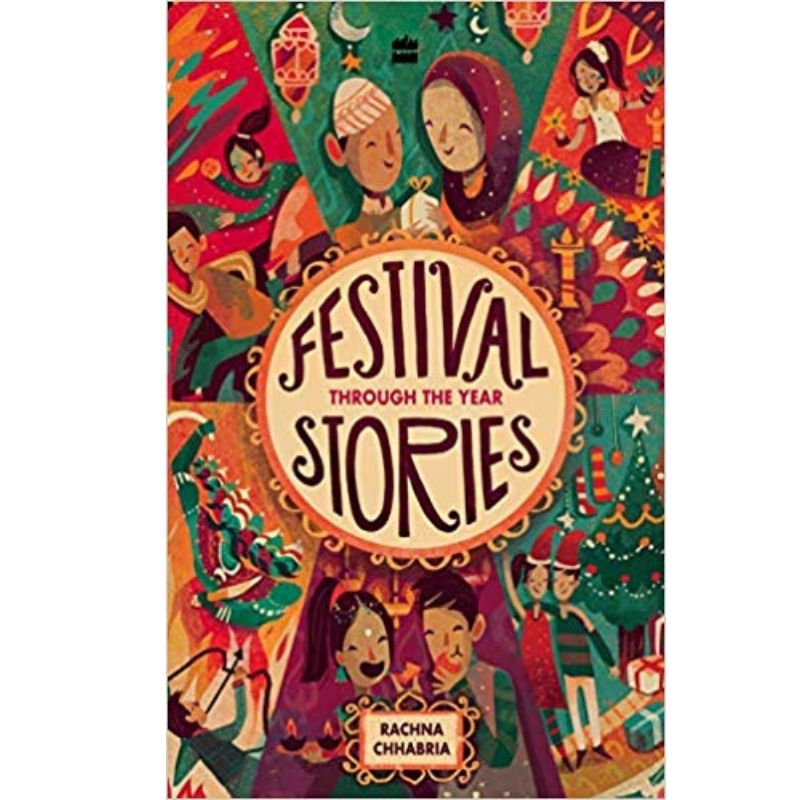 Festival Stories: Through the Year 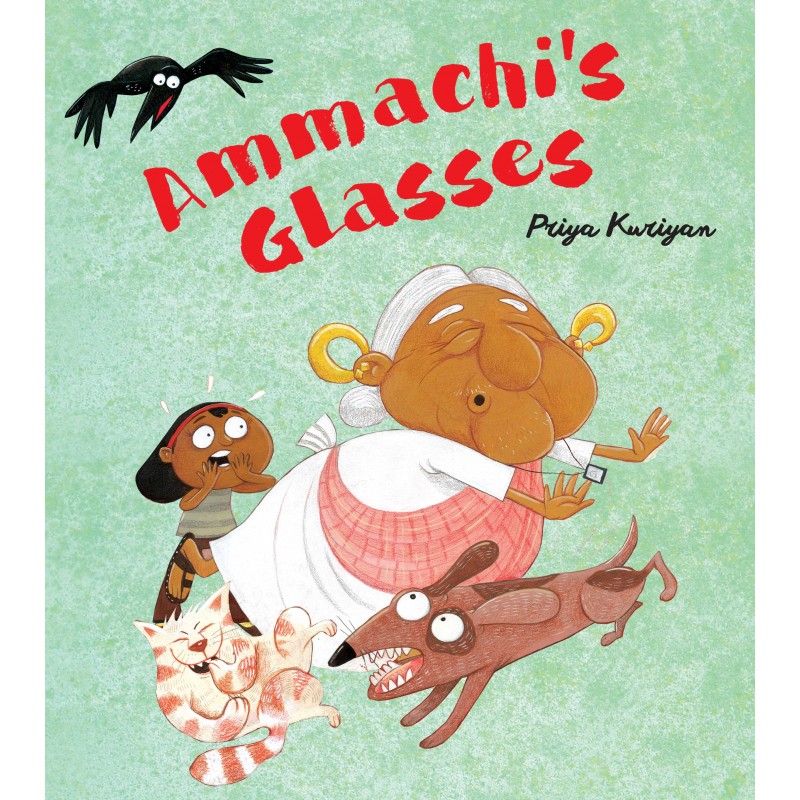 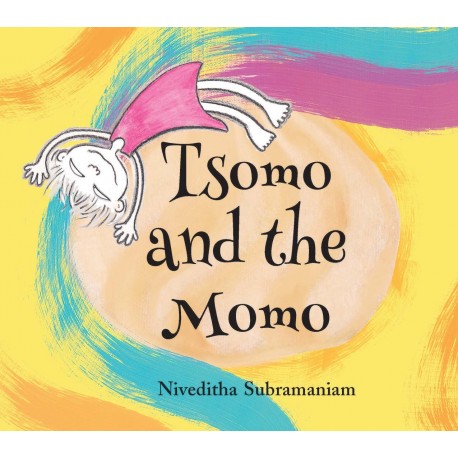 Tsomo And The Momo