Maithili and the Minotaur Web of Woe 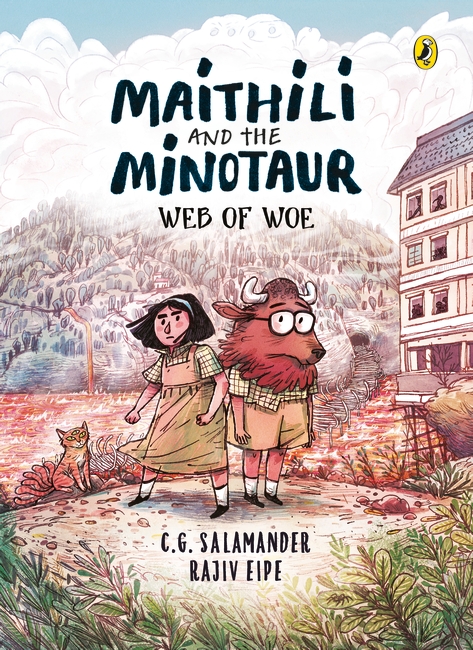 What if our world was a lot more? Filled with unknown creatures-some friendly, some scary.

An outcast to the world of humans, Maithili lives in the outskirts of a magical wilderness. But as she makes new friends in the realm of monsters, she must learn to be careful. Because some monsters are just like humans: mean, nasty and out for blood.

Perfect for fans of Hilda and Arthur and the Golden Rope, join Maithili and the Minotaur on their very first adventure in an outlandish world where nothing is as it seems. Your kids will love this graphic novel/comic book!

This incredible new graphic novel tells us the story of a girl named Maithili, who lives in the outskirts of a magical wilderness. Along with her friend the Minotaur, she sets off on an adventure in an outlandish world where not everything is as it seems. The book is filled with monsters, including the human kind. It is full of unusual characters and creatures, and we love the book’s twists, turns, its humor and of course, the phenomenal writing and illustrations. The book begins with a sequence that is drawn and written so cinematically that you can imagine yourself to be part of the story. Maithili and her mother are on the run from what look like antagonistic humans who are out to capture Maithili. There is something about her that worries them. Maithili's mother risks her own life trying to protect her. Maithili and the Minotaur hurtles us across different sequences in Maithili's life, all adding up to create an irresistible story that is also filled with funny moments right in the middle of intense and serious ones. The visualisation and story building that go into this graphic novel is truly amazing. When I interviewed CG Salamander and Rajiv Eipe, they told me why kids love graphic novels and comic books. Salamander gave the example of Scott McCloud, who wrote a book called The Invisible Art, a comic book about why comic books are such exciting forms of art. Salamander said that if you imagine that someone is swinging an axe in Panel A of the comic and you have someone screaming in Panel B, your brain fills the gap between Panel A and Panel B. Comic books that way are interactive and get the reader to fill the space with their own interpretation, unlike a cartoon or a film that does it for them. Isn't this so cool?

Henna On My Hands

Kesar and the Lullaby Birds